During the spring semester of 2016, VarGlad Spexarna, that I'm still involved with, decided rework the script of Titanic, from 2011. One of the scenes that remained in the rework, was the one that required the light-up sign.

Of course since then, the original sign had been scrapped and the led bars used in other projects. Not all of them though, and the scene in the new edition required a smaller sign anyway. However, the dream of proper DMX512 control was reborn, and by now most parts of a suitable hardware platform was already developed, and most of the time could be spend making sure that the firmware was stable.

One hardware change was required though, regarding the isolation of the rs485 circuitry. The way the hardware was developed is fine for a DMX512 transmitter, where power supply ground voltage is connected to the rs485 0V reference. For proper DMX512 compliance though, a receiver needs to isolate these two nets. In the case of this hardware platform the design change is very small: Desolder the isolated DCDC converter, turn it 180 degrees, and resolder. In reality, the change required slightly more bodgewiring and elbow grease, since the pins of the DCDC converter are not symmetrically placed, and wouldn't fit into the holes on the pcb, once turned around. Additionally, the board can of course no longer be powered from the for the task designated screw terminals since those are now connected to the output side of the DCDC converter. Two wires had to be soldered to the microcontroller side power nets, though this was not a problem, since the board was designed for external conncetions. 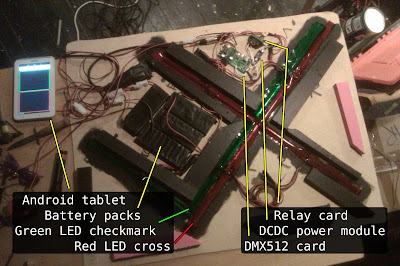 In the images above, the DMX512 receiver card is connected to a transmitter card, which in turn is connected to a computer (both not pictured). The computer is talking with the transmitter card through a serial port, and listening on the network for OSC messages, which can be transmitted by an app on the android tablet. Please note that the annotated DCDC power module is not the one discussed above, but another one bringing the external 12V supply voltage down to 5V.

The design was successful and the sign was added to the chain of lighting devices on stage, and controlled with the ETC lighting control table at the tech booth.

The firmware used in the receiver is simplified compared to previous versions, but works well: https://github.com/tlvb/dmxrx.